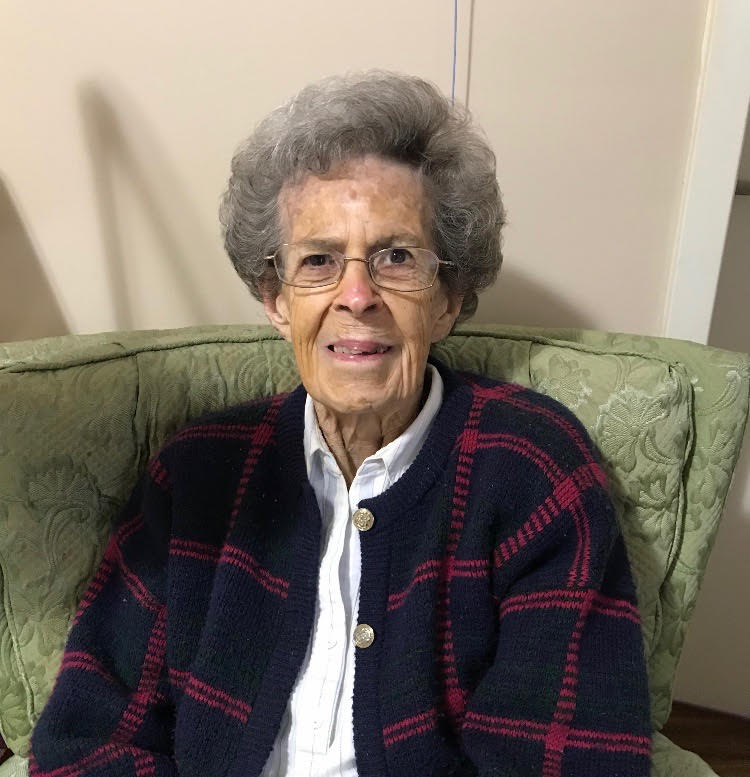 Emily Virginia Hudgins Spidell left this life to be with her Lord on June 27, 2020.  She was born in Norfolk on January 15, 1924. A member of “The Greatest Generation,” she lived through the Great Depression, graduated from Maury High School, and participated in World War II as a clerk at the Naval Supply Center, Norfolk, VA.

During the war she met a handsome sailor from California named Brian Spidell at Park Place Baptist Church in Norfolk.  She and Brian were married after the war and brought Gary and Glen into the world.

Emily was a member of the Tabernacle Church of Norfolk since 1949 where she was involved in various ministries including the Sunday School primary department, the church library, the missions house, the small group ministry, and many other church activities.  She and Brian were also “second parents” to young couples through the years as they opened their home and hearts to so many from near and far, many of whom were associated with the military.

Emily was preceded in death by her parents, Frank and Ruth Hudgins, her brother Calvin Hudgins, her husband Brian, and her son Gary (Connie) of Home, PA.

A recorded memorial service is being prepared for on-demand viewing online.  Information regarding how and when to access the service will be available on this website when the details become available.  Please check back periodically to access that information.

Especially in light of the fact that the memorial service is online only, the family requests that donations in lieu of flowers be sent to one of Emily’s favorite ministries. Checks may be made payable to “Global Friendship House” and mailed to Global Friendship House, 1241 W. 43rd St. Norfolk, VA 23508.  Online donations can also be made to this ministry at https://globalfriendshipventures.org.

“Favor is deceitful, and beauty is vain: but a woman that feareth the LORD, she shall be praised.”  Proverbs 31:30

I am so sorry you have to stay in for 15 days. I loved your mom and dad so much. She was truly a lady and so sweet I always had to go to Sears and visit your dad when I came to Norfolk to visit my dad. Your dad sang beautiful at my wedding. You are welcome here any time you want to come to Mathews. Will be in touch.

Emily always had a smile and kind word. We remember her and Brian fondly. Wishing sweet memories and peace for her son.

Brian and Emily touched so many lives. Including mine. They were incredible examples of love and commitment to each other and their Lord.