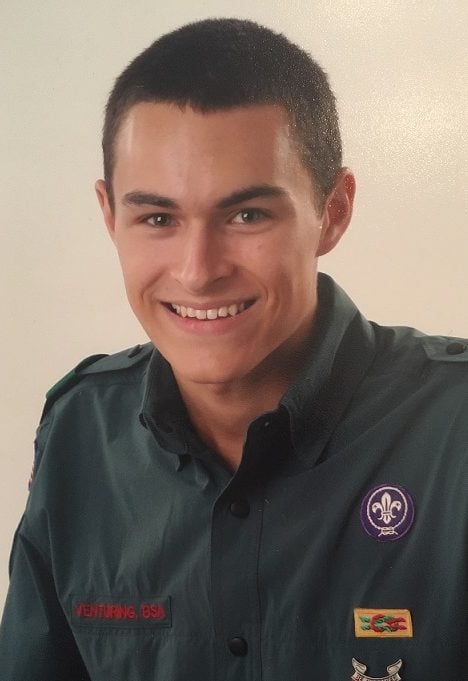 John Lafayette Barge of Norfolk, Virginia, passed away suddenly on May 25th after a nine-year struggle with mental illness. He was born to Hal & Elizabeth Barge on July 26, 1992 in Boston, MA.  He was preceded in death by his grandfather Walter S. Barge, and his grandparents Jim and Miriam Dunham.

John was an accomplished young man. He was a graduate of Norfolk Christian School and Virginia Tech, where he earned a degree in Chemistry. He studied abroad in both Spain and Germany, where he learned to speak both languages. John was a skilled project scheduler at Oceaneering International and a software developer at Techark.  He was an avid outdoorsman; he spent his youth in the Boy Scouts, and earned his Eagle Scout Award in 2009. In recent years, he hiked all but 200 miles of the Appalachian Trail, in two large sections.

Despite his struggles, John was an excellent son, a loving brother, and a good friend; he leaves behind a host of witnesses to this fact. He was a committed Christian and loved to read and study the Bible, on his own and with his group in Bible Study Fellowship.

There will be a Service of Witness to the Resurrection Friday, May 29th at 2pm at First Presbyterian Church at 820 Colonial Ave, Norfolk.  Because of current gathering restrictions, there will be limited seating in the sanctuary and First Hall. The service will be live-streamed at www.fpcnorfolk.org and all who wish are encouraged to participate remotely.

In lieu of flowers, the family recommends making a donation in John’s name to Tyndale Theological Seminary (Amsterdam, Netherlands), Bible Study Fellowship International or the Appalachian Trail Conservancy.  We are greatly comforted to know that John passed from life to life and he lives because Jesus lives.

I am so sorry and terribly sad to hear of the news of your son who is now asleep through our Lord Jesus and I will be praying to God and our heavenly Father for comfort and strength for you and your wife, daughter, and relatives in the days ahead.

Take care and praying for you,

I am terribly sorry to hear about the passing of your son. Please accept my warm and heartfelt sympathy to you and your entire family during this difficult time.

Our thoughts and prayers are with you and the Barge Family on the loss of your beloved Son.

May your fond memories of John help carry you through these most difficult of times.

Our condolences and warmest regards,

Hal and Elizabeth-
My thoughts are with you and your family as you grieve the profound loss of your dear son.
May all of your good memories with John provide you comfort and peace during this most difficult time and forever after.

Hal,
My heart goes out to your family. You are in my prayers during this difficult time.

My heart breaks for you, and I will be praying for you and your family. May God grant you strength and cover you with grace as you cope with this unimaginable loss.

Hal and Elizabeth,
My thoughts and prayers are with you and your family in these sad times. I had the pleasure of having John as a scheduler on several of my projects, such a bright, smart, and wonderful young man whose infectious smile is something I will always remember. May God look over and comfort you and your family. God Bless you all.

Hal and Elizabeth,
I am so saddened by your incredible loss. John was such an awesome young man, and he was taken way too early. I wish I knew something to say that would ease your pain. I know God will take good care of him. Prayers to your family!!

Hal and Elizabeth,
My heart goes out to you and your family and I wish you the best in this difficult time. I thought of Jon often and remember the time when we worked together. God Bless you.

Hal & Elizabeth,
I am so sorry to hear of John’s passing. I enjoyed getting to know him during the time we worked together, he was a wonderful young man.
I especially enjoyed our talks about hiking as he prepared to tackle the Appalachian trail.
I know this is a very difficult time and I will lift the family up in prayer. We can all take comfort in knowing he was saved and is now in the presence of our Lord.