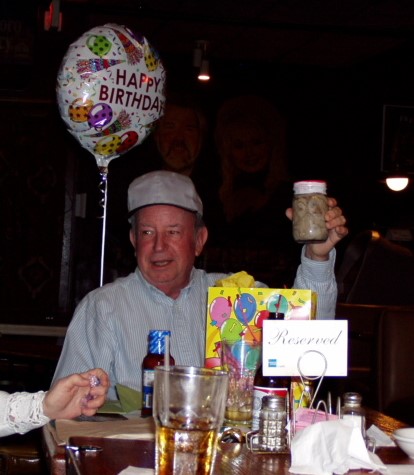 Norfolk- Steve Holland Dudley, 83, passed away May 15th in his home in Norfolk. In his younger years he earned a living as an aircraft mechanic and commercial pilot near Richmond Va.  He moved to Norfolk in the late 1960’s to work as an aircraft mechanic for Piedmont Airlines/USAir , until he retired in 1996. The only things he enjoyed nearly as much as spending time with his family were aviation, auto racing, classic vehicles, and bluegrass music.

He was preceded in death by his eldest son,  Steve  Jr.(Ace) . He is survived by two sons Troy and Scott, Former spouse Betty, Grandson Steve III, and their families.

There will forever be an emptiness in all of our lives. He will be sorely missed by many.

Love and Miss You

While I didn’t know Mr Dudley really well, I did enjoy an evening of tacos with him and the family and I was struck by the obvious love and devotion he had for his family. Easy going and a sly sense of humor, the world is a little bit duller without him. And if perfection truly exists in the hereafter there will always be Taco Tuesdays for him to enjoy. RIP Mr Dudley.

We’re sorry for your loss. He was a great man and will be missed. Sending our love.

Linda and I are so sorry for your loss.

My prayers are with you’ll. Mr. Dudley love a good laugh and now he’s watching his racing and know who’s going to win Scott!!!

Thoughts and prayers for the Dudley Family. Great co-worker and man!

Steve was a great man. Our thoughts and prayers go out to the Dudley family.

Sorry about your loss. I will be keeping the family in my prayers.